Sorry it's taken me so long to post our activities from a week ago. We haven't had air conditioning until now and it's just too hard to have a hot laptop near you when you're dripping in sweat. So...on March 17 we visited the surrounding area of Ubud to see more cultural dances, rice terraces, temples and an active volcano. The original plan was to go to a town called Monduk but it seemed a little far so we stuck a little closer to town.

Our first stop was to watch the Sahadewa Barong & Kris Dance. Our driver said it would be different than the one we watched the night before but it wasn't. It was the same. Over the course of the day we realized that he was bringing us to places where he likely gets a kickback. We were OK with it though - we were being driven around in an air conditioned car to see things that we wouldn't normally see.


We then headed to some temples. The first one we visited was Pura Puseh Desa Batuan which means the Batuan village temple (of origin). We had to wear sarongs before entering the temple - it is customary to wear sarongs as a sign of respect.


There are many rice terraces in Bali, our driver took us to the Tegallalang Rice Terraces - it was amazing! 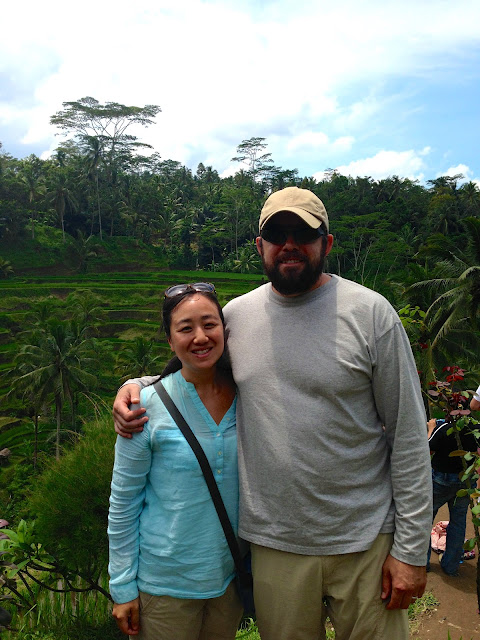 Our next stop was the Gunung Kawi temple but when we got there, I happened to read the rules...


...which prevented me from entering. Had I known the rules before the first temple, we wouldn't have seen any. I'm glad that we were able to see one but I feel bad that I broke the rules (albeit unknowingly). Hopefully I did not anger the gods.

Since we couldn't go into this temple, we looked for our driver so we could leave but he was nowhere to be found. He apparently had gone into the temple. I explained that because of the rules, I wasn't allowed to enter...he seemed to understand and we left for the volcano.


The volcano, Gunung Batur, is an active volcano which last erupted in 1994. We had lunch first at a really expensive Indonesian buffet and then snapped a few pics before leaving the area.


Since temple visits weren't going to happen, the driver suggested going to a waterfall or the Bali Zoo as our last stop. We opted for the zoo because it had been over a week since we walked around smelly animals on a hot day.

Posted by paul and christine at 5:42 AM