I wrote this post real time as we laid in our dirty bungalow waiting for the electricity to be turned on...

Our Similan islands adventure started by waking up at 5am for a pick up between 5:30 and 6:30. We should have known it was a bad idea when we found that out. But like Paul said back in paihia- we just don't seem to listen to that little voice of ours. So, like dutiful tourists, we sat in the reception area of our hostel for 45 minutes. 6:15 is when we finally got picked up. And the it was about an hour and 45 minute drive to the pier (of course picking up more people along the way). When we finally arrived at the pier, it was crowded. 10 minutes later, it was even MORE crowded.


I should sidebar here and say that everything we had read about Similan islands was that it was a secluded island with great beaches. Even when we made our reservations, the guy said there are only 6 bungalows that you can reserve. So naturally, paul and I thought that we would have a nice bungalow with a little beach to ourselves. Oh, and we were told the only way to get to the island is booking with a snorkel tour. You stop and snorkel right before getting to the island (island #4) to check into.

Ok, so back to our journey to the island. After checking in with the tour, we are given a colored bracelet so we are organized in groups. there are about 150-200 people waiting so it was important to know which group you are with. Paul and I (naturally) brought our packs- the 2 large and the 2 small since we are staying on the island for 2 nights. After having some free fly infested croissants, toast and tea, the green bracelet group was finally called. We made our way to the boat that fit about 25 people.

The 1.5 hour speedboat ride was bumpy but for once I wasn't seasick. But the 23 other Chinese people were vomiting left and right. Bags of vomit everywhere. It was almost like the story in Stand By Me where people are vomiting on top of each other from seeing and smelling each other's vomit. It was not fun.

After what felt like forever, we made it to the snorkeling point which we were only given about 30 minutes. Hardly worth it. Paul didn't bother but I jumped in just in case I missed crazy clear water or some special fish. Nope. It was cloudy and crowded. So far, the travels to the island haven't felt worth it.

Once on the island, we went to the buffet lunch. I emailed ahead about Paul's allergies and they said there would be plenty for him to choose from...there wasn't. Everything had either soy, shrimp, or eggplant in it. After telling the staff, Paul got some stir fried broccoli with garlic and fish sauce which he put over white rice. Yum.

After lunch we checked into our bungalow. As we walked towards the bungalow area, it was clear there were a lot more than 6, especially since we were in bungalow 11! As we walked up a very steep flight if steps, we saw that there were 20 bungalows where we were headed.

So, in sum, we were duped. But i still had hope. I figured there were secluded beaches on the island that we could walk to and make our own...there were a couple trails- one to a small beach and one to the sunset beach. The small beach was closest so we made our way there. It was crowded! With more day snorkelers. And with high tide there was really nowhere to lay out. So, we headed towards the sunset beach. Fail. Again. You could walk there but it was filled with garbage. The only highlight was the view from this point we walked to.

So, we have retreated into our bungalow to await the power to be turned on. What will we do for the rest of the day (it is only 2:30pm) and what will we do the whole day tomorrow? I guess that's all part of the adventure. I'm beginning to think that the adventure is getting to know my husband better as we spend 24/7 together. I wouldn't want to travel with anyone else and we always have fun together- whatever the situation. We may end up hiding in our room (maybe for good reason, maybe not) but as the wise Bobby Brown once sang, it's our prerogative! We do what we want! Plus, it is storming outside right now.

It was such a bad sleep last night that Paul wants to leave today and just call the room we have booked for one more night a loss. The springs on the mattress are sharp blades in our back anyway. Not to mention Paul's eyes are puffy from the lack of sleep. So we walked down to the dock to inquire about direct boats back to the main land. Even though I was told there were not any direct boats, there is one this afternoon. Now we have to decide of we want to pay an extra $100 to get off this island. The thing is, we don't have reservations for the night...

After calling the hostel (I found a friendly tourist who let us borrow his mobile phone) to see if they had room tonight and finding out they didn't, we decided to stay. We laid out on the beach for a couple hours and then had lunch.

Lunch didn't agree with me. This is something I always warn Paul of and he never listens. This time the tables were turned. He advised me not to eat the basil on our curry dish because his basil leaves were black. Back on Gili Trawangan in Indonesia, I had advised the same thing when we both had the same salad and the lettuce was black for me but not for him. He paid for it after that lunch but at least we had a nice bathroom. This time, for me, we went on a hike (to see a great view)…not a great idea...and we didn't have a nice bathroom. See, traveling the world is not all that glamorous. I recently read in one of the Lonely Planet guides that 30-50% of travelers will get traveler's diarrhea within the first 2 weeks of traveling. So…I'd have to say that I did just about alright!


The next day, on April 13, we checked out early (before the mandatory time of 10am) and had hopes of having breakfast. But since breakfast (we were just going to order toast) isn't served after 9am and it was 9:15am, we basically sat around for 3 hours before getting onto our boat to snorkel at Similan Island #8 before heading back to Phuket.

This snorkel trip was much more enjoyable than the trip in. We had more time first of all and second, the water was more clear. After 40 minutes in the water, we headed to shore to check out the beach. 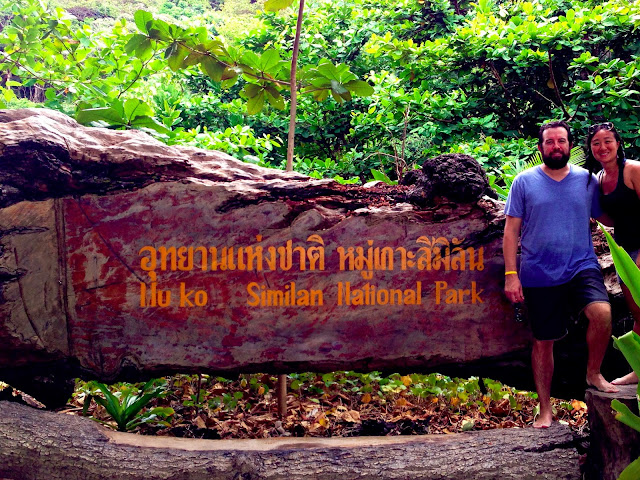 We finally made it back to Phuket Town around 6pm. So yeah, another long day!

Posted by paul and christine at 12:37 AM