On August 27 we arrived in Guangzhou (the city where my mom was born) to stay one night before traveling to my grandfather's village. The extent of which we saw Guangzhou consisted of the path between the Guangzhou train station and the apartment we stayed in. We found a place described as "a 3 minute walk from the train station" so it'd be easy for us considering we had our packs on.


When I asked where the hotel/apartment was in English, I got laughed at and then offered the cost of 40 Yuan from the taxi driver to take us there. I replied in Chinese, "What are you laughing at? It's close by, why would I pay you 40?"


The apartment we stayed in was one of the smelliest and dirtiest. Paul didn't even open his backpack to change his clothes. I found a cockroach in a cupboard and made Paul check it out. He found the source of the rotting smell - it was a leftover bowl of instant noodles in the cupboard with the cockroach. Classy. You may ask why we didn't just go complain - since I'm usually so good at it. Well, we had already tried to ask for a taxi for the next morning to take us to the airport they only said "no taxi." So, perhaps it was the language barrier but I'm sure it's just that the locals don't like to help. They especially don't like to help me because I look Chinese but tell them I'm American. My Mandarin got us by and helped (or so I thought) in some situations but it wasn't until we met a couple of New Zealanders (aka Kiwis) on our Tibet tour that I fully realized how much I was handicapping Paul by traveling with him in China. Basically the locals don't like helping us because of me. Andy and Warrick, the two guys we traveled with around Tibet, told us how helpful everyone was with them while they navigated through China - offering directions and even offering to pay for taxis! Maybe I was just in denial the whole time but now that I reflect on our time in China, it is clear that if Paul did all the talking and I stayed 3 feet behind, we may have gotten further. More than once people assumed I was Paul's tour guide. Paul says that he felt people's contempt for me.

Anyway, I digress...we were so disturbed by the dirtiness of the room that we probably only slept for four hours.


The next morning, we headed to the train station to wait in the taxi line. 45 minutes later, we got one to take us to the airport.


We made it to Meixian airport where my mom's friend and some family members I've never met, greeted us. We then drove another 2 hours to Ping Yuan. When Paul and I planned our China itinerary and discussed options with my mom, she suggested that we visit Pingyuan for a few reasons. One - it is where my grandfather (my mom's dad) is from. Two - my mom's charity, TLC Charities, supports local students with scholarships. And three - my mom wanted a second opinion on a potential investment (one of her dreams is to build a bamboo farm). Interested in seeing where my family is from and knowing my mom needed some help, we planned our trip to Pingyuan. Only a week or so prior my mom decided she could meet us there. Lucky for us because the language barrier would have been challenging. The locals, including my family, speak Hakka, a dialect that I do not understand. Between my poor Mandarin and everyone's limited English, it was just great fun for Paul!

Upon arriving in Pingyuan, we had a home cooked meal. After a short nap, our first order of business was to hand out this year's TLC scholarships to the students. TLC Charities is a 501c3 non-profit organization that my mom founded in 2008 in hopes of providing moral and financial support to less fortunate and disadvantaged children. The goal is for children to experience a more consistent education at the highest quality available as well as support disadvantaged single mothers who may be going through a difficult period in their lives.

We chatted with the kids so they could practice their English for awhile and then we headed back to my mom's friend's place. My mom arrived late that night and the next morning we checked out some potential land located in the Lovesickness Valley, Shang Ju.

We then toured the already developed tourist area.

We then had lunch with all the people who were trying to get my mom to lease the space. They are relentless with the rice wine shots. Paul had to take a few.

Our last day in Pingyuan, we went to visit the Lin Family Tomb. 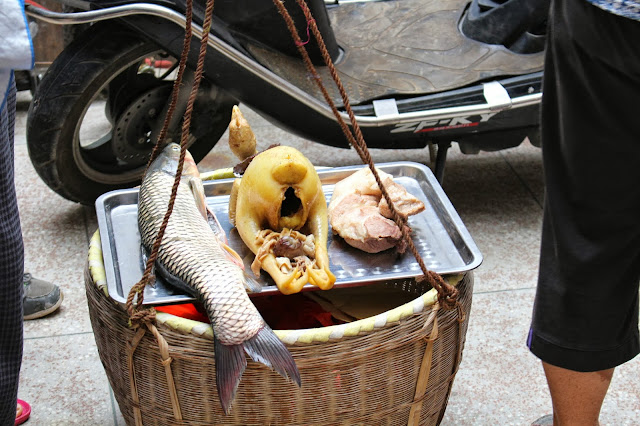 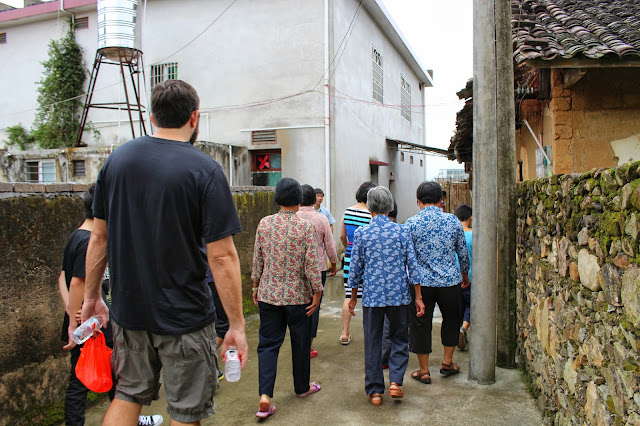 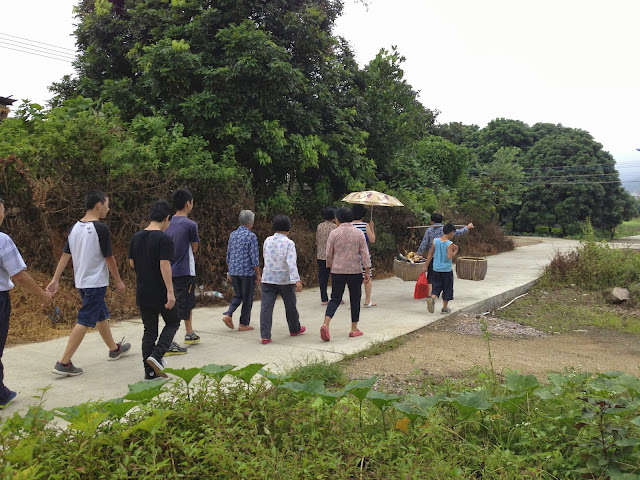 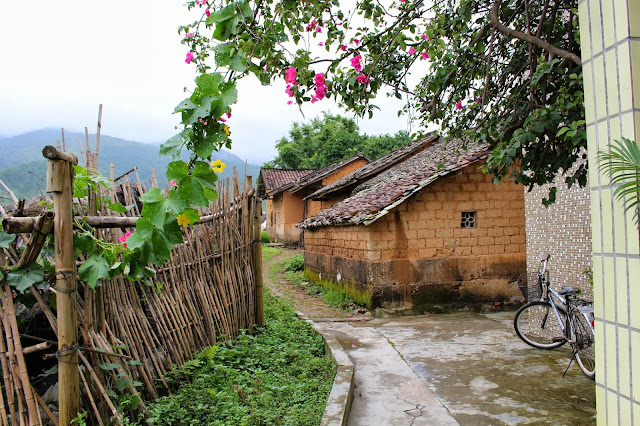 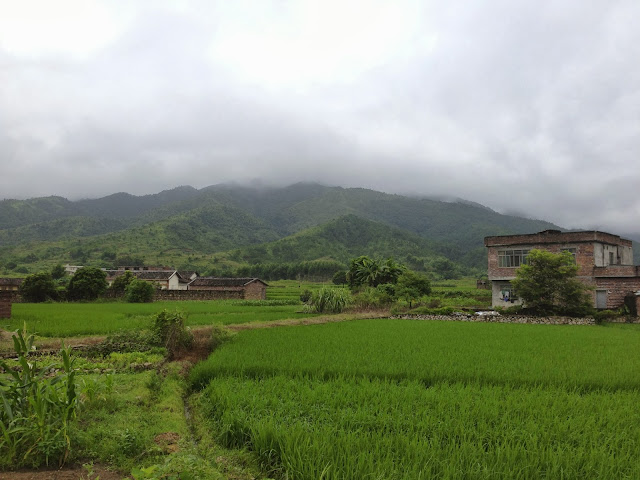 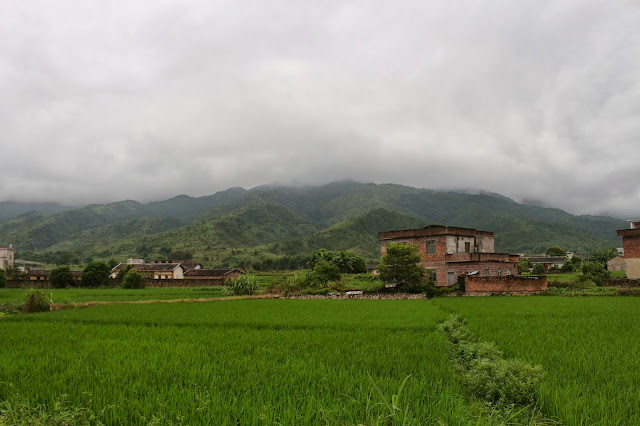 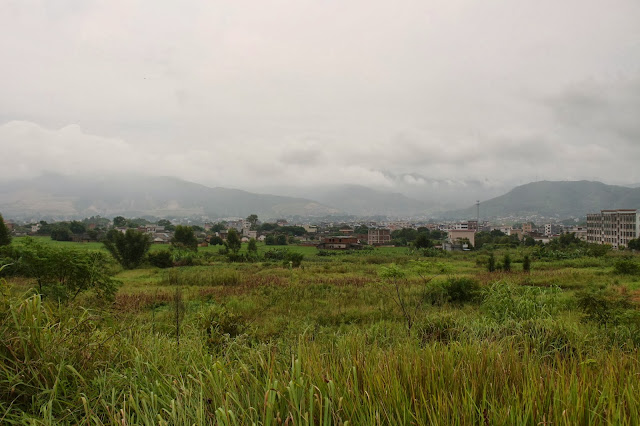 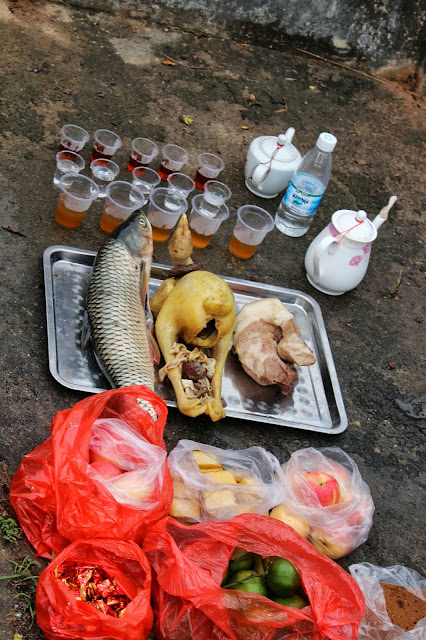 After allowing the spirit world to take the offerings, the fruit was shared with everyone and the meats taken back home to cook a feast for the family.

While the relatives prepared the feast, we chatted with some of the kids and walked around the area.


Before leaving, I asked my mom if each of the families could group together so I could take photos to try and understand how everyone is related. I don't think it really helped since I'm still not sure who is who but I'm glad I was able to capture some family photos. I don't feel bad because my mom said she's not able to keep it straight either. I just know that the older group of women and gentlemen are my grandfather's brothers' kids (my mom's first cousins) and grandkids. The birth order and everyone's names? Um...yeah, I'll have to work on that. 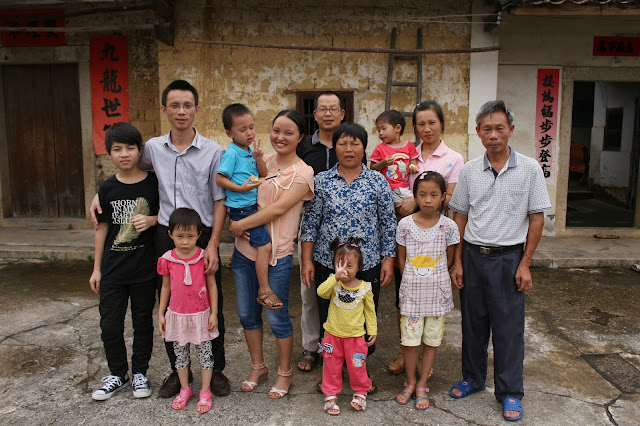 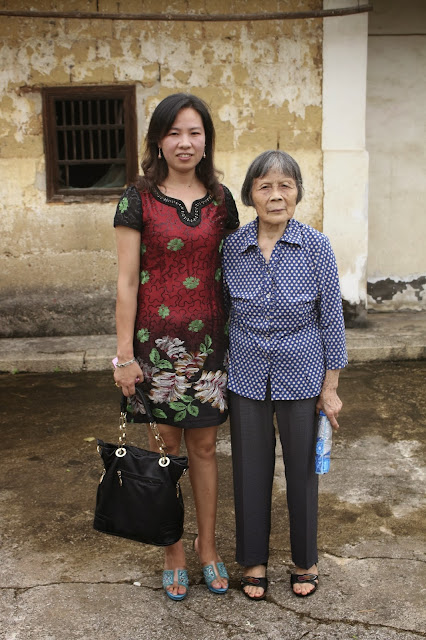 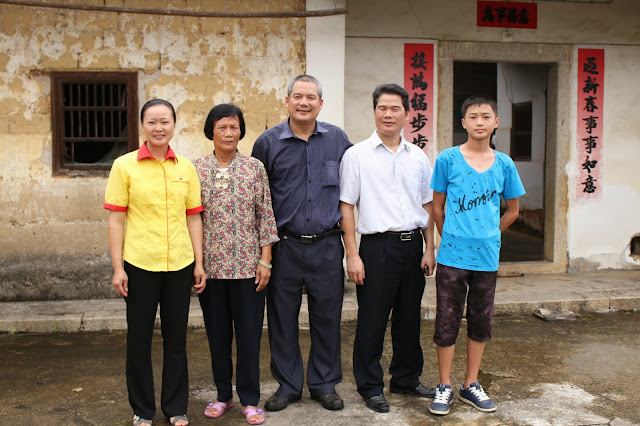 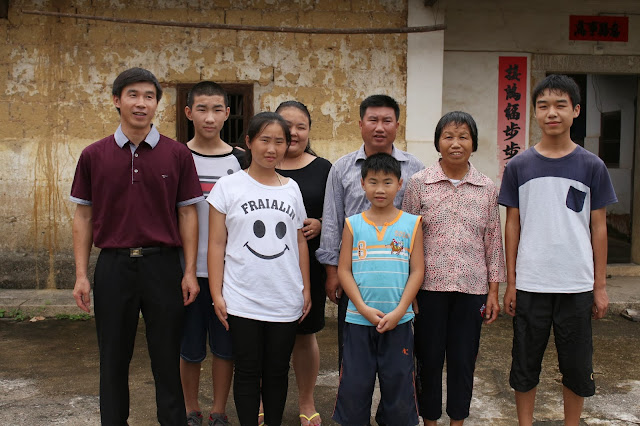 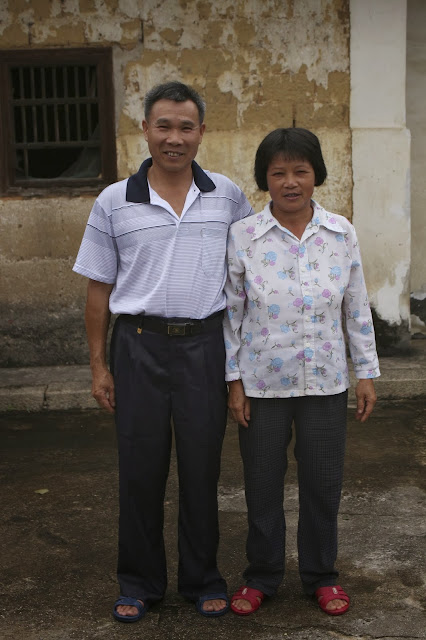 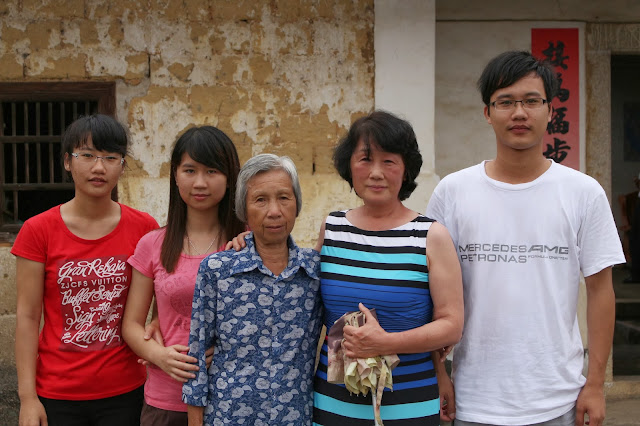 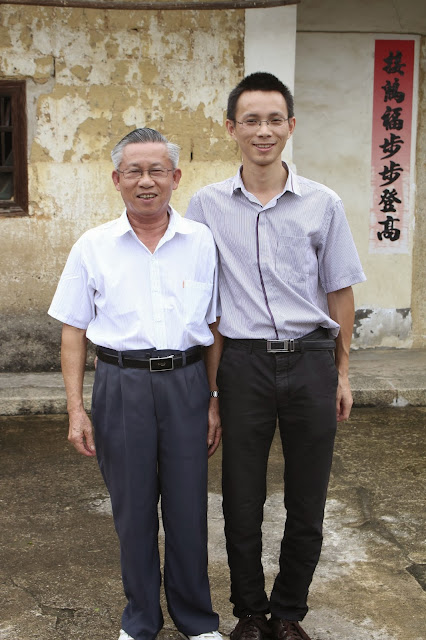 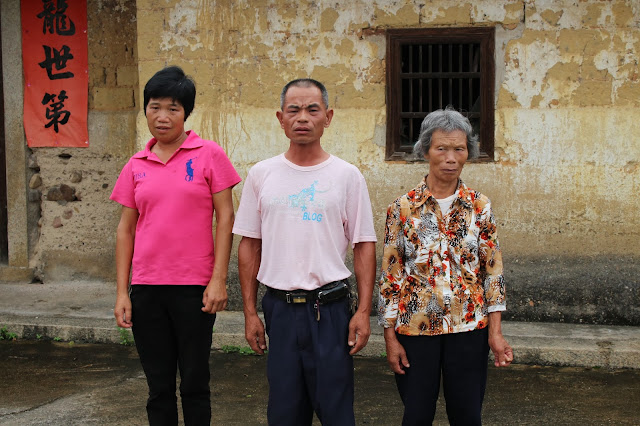 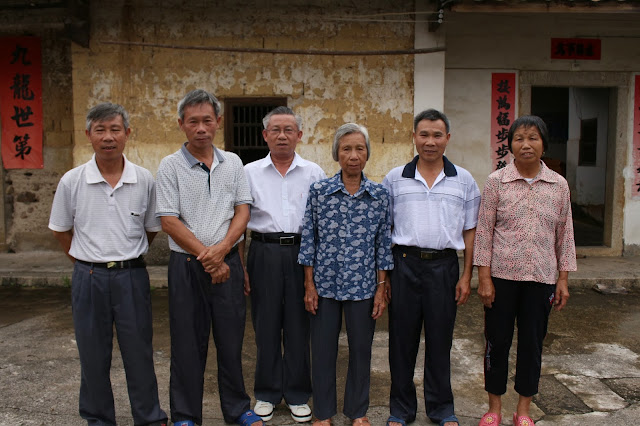 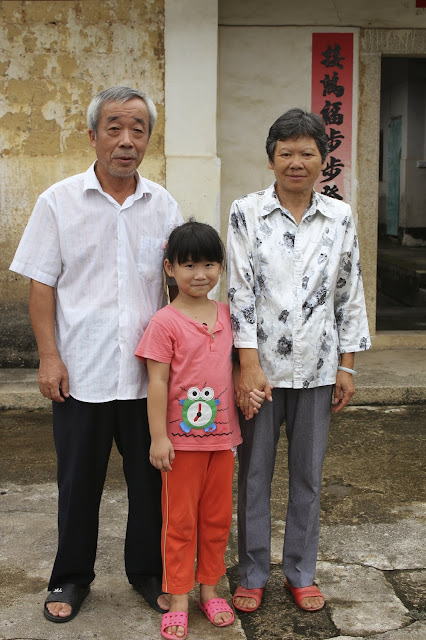 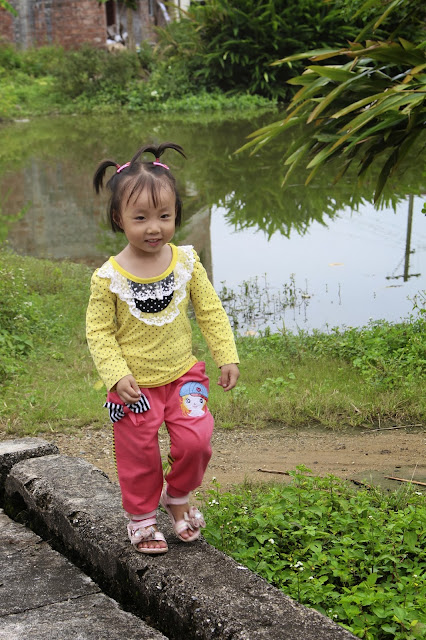 Posted by paul and christine at 3:24 AM