Because our flight was delayed, we arrived in Addis Ababa pretty late on October 16.


We spent a total of 3 nights in Addis Ababa - 2 of which we did nothing. We arrived late the first night and then the last night we stayed close to the airport.

In planning our Ethiopia trip, we had heard from a few people - through blogs and places we planned to stay at, that it would be easy and cheap to buy domestic tickets upon arriving in Addis Ababa. So, me being the planner that I am, had to step outside of my comfort zone- something I've done quite a bit on this journey. And in this case, it really didn't work out for me.

I had found a website and contact that would buy our domestic tickets from Ethiopian airlines for a fee called Blue Sky but with the 3 week back and forth and my paranoia about using Western Union (the guy at Blue Sky asked for some secret question/answer which I attribute to signs of identity theft) - I opted to take my chances at buying our tickets upon arrival - given the fact that people said it would be no problem. Well, we had a problem. Our original itinerary had us staying in Addis for 2 nights, 1 night in Bahir Dar, 1 night in Gondar, 2 nights in Lalibela and 1 last night in Addis before flying to Kigali. What we found out when we went to the Ethiopian Airlines office (located at the Hyatt), was that flights to Bahir Dar were sold out for the date we planned for - they were sold out for all and any configuration I could think of. The only thing we could do was fly to Lalibela. So we did - and stayed there for 4 nights. A bit long - I wouldn't recommend that long but do go! More about Lalibela in a separate post.

Anyway, the day that we visited the Ethiopian Airlines office was the only day we walked around town. A local guy / guide started talking to us and before you know it, he was showing us some sites. Paul and I knew he would ask for money at the end - which I understand - but I just wish he would have been up front about it. At first he was just walking along with us- asked us where we are from, what we are doing in Addis. Then he points out places to visit and we end up following because it's easy and we have no idea where we are. We saw the local attractions - all via walking in some pretty hot weather. I would ask how much further at certain points and this guy would say - 5 minutes. But it would end up being 40 minutes. "1 minute" was 15 minutes. Anyway, we saw a few interesting things. Check it out.

We then headed to the National Museum of Ethiopia to see "Lucy" (aka "Dinkenesh" to locals), the skeleton of a female Australopithecus afarensis found in 1974. Lucy is estimated to have lived 3.2 million years ago. She was on tour in the United States for 6 years and only recently (May, 2013) returned to Ethiopia so we got to see her and not just a replica! 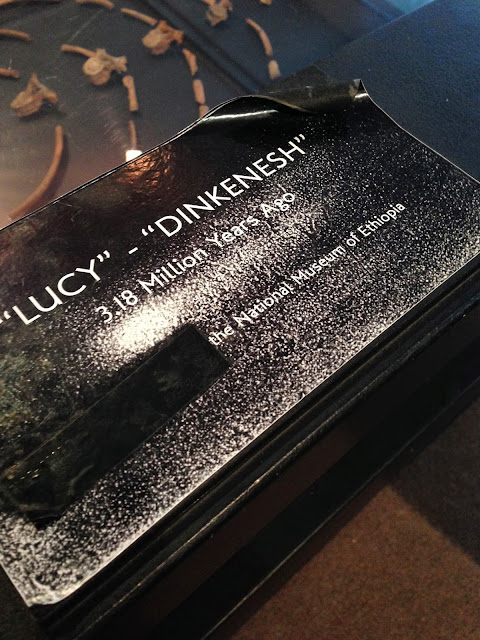 Posted by paul and christine at 3:04 AM